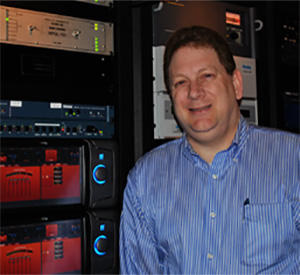 Jim, or as he was known in the beginning of Z as “General Jim” for general (manager) Jim Hoge. This is contrary to the belief that it came from a militaristic management style. The story was he recorded a short message when the station signed on and someone logged it in the computer as, “General Jim” – and the name has stuck ever since!

Our Jim was born in San Antonio, Texas but grew up on the edge of the Blue Ridge Mountains on the border of Virginia and West Virginia in the city of Bluefield. He began his broadcasting career at the age of 3 on his grandmother’s TV show, Kiddie Kapers which aired on WHIS-TV Channel 6.

Jim took an early interest in electricity and electronics, building a complete radio station, including a 50-watt transmitter, for a ninth-grade science fair and winning first place in the school.

Jim started working part-time beginning at WHIS/WHAJ radio while in high school.  Within a year, Jim was a popular on-air announcer for the station.

Jim earned degrees in electrical engineering technology from Bluefield State College and business administration (Management/Finance) from Marshall University in Huntington, WV.  At Marshall, he was named the student manager of WMUL-FM, the radio station on campus.   One thing he did was institute 11 hours of Christian music on the weekends.

After graduation, Jim worked primarily in secular radio.  In 1981, he and two associates formed a company called Texar, Inc., based in Pittsburgh, PA that manufactured cutting-edge audio processors for major market broadcasting.

In 1986, Jim sold his interest in Texar and moved to Florida.  While working for a radio station near Orlando, he got inspired to bring contemporary Christian music to the region and was able to find a non-commercial allocation for that purpose.

Presently, Jim is the president and chairman of Z88.3 in Orlando which is broadcast on four full power FM facilities and 13 translators throughout Central Florida serving 4.77 million residents plus encompassing additional offerings that are:

LivingWorship.Radio® – The best of modern worship 24/7 with limited interruptions.

In addition, he serves the community as the Vice-Chairman of the Board of directors for Circle Christian Schools, serves on the board of advisers for Nathaniel’s Hope, Inc., (A special needs children ministry), Palm Beach Atlantic University (PBA) Orlando Campus Advisory Board, and with wife Eunice, teaches 4th grade boys each week at Orlando Children’s Church (OCC), a ministry to teach the Faith to underprivileged and marginalized children, and 5th grade at Northland Church in Longwood.

Jim has been married going on 32 years to the former Eunice Medina of Cali, Colombia, and they have two beautiful grown daughters that take after their beautiful mother; Viviana, a graduate in International Business from Palm Beach Atlantic University (PBA) and married to Jacob del Campo, an engineer (UCF) at Lockheed, and, Gabriella, who recently received her graduate degree in Biblical Studies and Ministry from PBA.